Russia slams US pressure on Turkey over S-400 systems 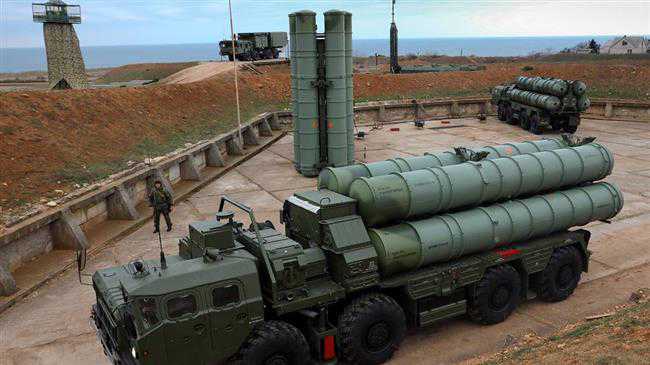 Russia has strongly condemned US pressure on Turkey over its purchase of advanced Russian-made S-400 missile defense systems, describing Washington’s threats of sanctions over procurement of the military hardware as “unacceptable.”

“We consider this rhetoric unacceptable, since it is actually about pressure,” Russian Foreign Ministry Spokeswoman Maria Zakharova said at a press briefing in Moscow on Thursday.

In recent years, Washington has used sanctions policy in those issues where it is necessary to promote its own interests.”

“The policy of pressure is unacceptable in the existing coordinate system of international relations,” Zakharova pointed out.

Her remarks came a day after US senators backed legislation to impose sanctions over its military offensive in northern Syria and the purchase of a Russian S-400 missile system.

Turkish Foreign Ministry, in return, denounced the sanctions bill on Thursday, terming it “a new manifestation of disrespect for our sovereign decisions regarding our national security.”

Turkey FM says may tell US to withdraw from Incirlik
Turkey has threatened the United States with requesting its withdrawal from Incirlik Air Base if Washington imposes sanctions on Ankara over purchase of S400 missile defense systems.
“These initiatives do not have any function other than to harm Turkish-US relations,” it said in a statement, calling on Congress to act with common sense.

On Wednesday, Turkish Defense Minister Hulusi Akar said his country would not back out of the procurement of S-400 missile systems, and is currently in contact with its NATO allies, particularly the United States, to work out a solution to the matter.

Giving up on S-400 missile systems out of question, says Turkish defense minister
Turkish defense minister says Ankara will not back out of the procurement of advanced S-400 missile defense systems from Russia.
“We repeatedly reiterate that the US is our strategic partner, and we expect them to act in accordance with the spirit of strategic partnership.

There is no such thing as giving up on this system anymore.

We need to focus on finding a solution with the existence of this system,” Akar said in an interview with official Anadolu news agency.

He added that Ankara will continue its contacts with all relevant parties to handle disputes caused in the wake of S-400 purchase from Moscow.

Akar highlighted that Turkey has already taken delivery of two batteries of the S-400 system, and is now in the process of its installation.

The Turkish defense chief also said that relevant military personnel will complete their training for the activation of S-400 missile defense systems acquired from Russia by the end of December.

US Senators urge Trump to ban Turkey over S-400 purchase
Two US senators have urged President Donald Trump to sanction Ankara over its purchase of Russia missile system S-400.
Ankara and Washington have been at loggerheads over Turkey's purchase of the S-400 systems, which the United States says are not compatible with NATO defenses and poses a threat to Lockheed Martin F-35 stealth fighter jets.

“They (US officials) told us 'don't activate them and we can sort this out', but we told them that we didn't buy these systems as a prop,” the top Turkish diplomat said, adding that Turkey would be open to buying US-made Patriot surface-to-air missile systems as well.

Russia plans to sign new S-400 deal with Turkey in first half of 2020: Official
A top Russian military official says Moscow plans to sign new deal on the advanced Russian-made S-400 missile defense systems to Turkey in the first half of 2020.
Turkish Foreign Minister Mevlut Cavusglu told private Turkish-language
TGRT Haber television news network
in an exclusive interview back on July 22 that his country would take retaliatory measures in case the United States slapped sanctions on Ankara over the Russian-made systems.

“If the United States portrays an adversarial attitude towards us, we will take retaliatory measures, as we've told them.

This is not a threat or a bluff.

We are not a country that will bow down to those who show an animosity towards Turkey,” he said.

The White House said on July 17 that it was no longer possible for Turkey to be involved in the program for the F-35 stealth jets after parts of S-400 began arriving in Ankara.

It also said it would impose sanctions on Turkey under the Countering America's Adversaries Through Sanctions Act (CAATSA).

Turkey to test Russian S-400 systems despite US warnings: Report
Turkey is set to test its Russian S-400 missile system despite pressure from Washington.
The US Congress passed the CAATSA against Russia in August 2017 over allegations of interfering in the 2016 presidential election.

The law, among other things, imposes sanctions on countries and companies that engage in contracts to purchase weaponry from Russia.

Moscow and Ankara finalized an agreement on the delivery of the S-400 in December 2017.

said
in Ankara that they had agreed to expedite the delivery of the S-400.

At the time, it was said that the delivery could be made between late 2019 and early 2020.

A number of NATO member states have criticized Turkey for purchase of the S-400, arguing the missile batteries are not compatible with those of the military alliance.

A senior State Department official says Turkey needs to get rid of the advanced Russian S-400 missile defense system to put an end to the standoff with the US
They also argue that the purchase could jeopardize Ankara’s acquisition of F-35 fighter jets and possibly result in US sanctions.

The S-400 is an advanced Russian missile system designed to detect, track, and destroy planes, drones, or missiles as far as 402 kilometers away.

It has previously been sold only to China and India.

Ankara is striving to boost its air defense, particularly after Washington decided in 2015 to withdraw its Patriot surface-to-air missile system from Turkish border with Syria, a move that weakened Turkey’s air defense.

Before gravitating towards Russia, the Turkish military reportedly walked out of a $3.4-billion contract for a similar Chinese system.

The withdrawal took place under purported pressure from Washington