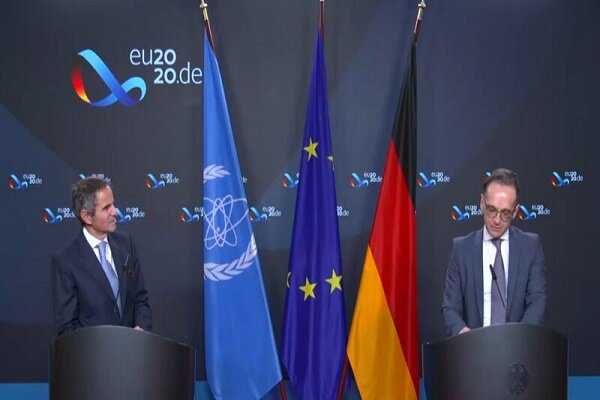 TEHRAN, October 26 (MNA) – German Foreign Minister revealed the continuation of effort of European troika (UK, France and Germany) to maintain nuclear deal, JCPOA, with the Islamic Republic of Iran.Speaking in a joint press conference with the Secretary General of International Atomic Energy Agency (IAEA) Rafael Grossi, held in Berlin on Monday, Heiko Maas emphasized the cooperation of European troika with this international body in line with maintaining nuclear deal with the Islamic Republic of Iran.

The International Atomic Energy Agency (IAEA) has continued its worldwide inspections in the wake of spread of coronavirus global pandemic, he said, adding, “This is valuable and shows real trust in this trans-sectarian and trans-regional organization.” According to Maas, IAEA has been able to continue monitoring and verifying Iran’s nuclear program in coronavirus condition.

His country along with France and UK will continue its efforts to maintain and preserve nuclear deal with the Islamic Republic of Iran, German foreign minister stated.

In this line, Germany will cooperate very closely with the International Atomic Energy Agency (IAEA).

Elsewhere in his remarks, Heiko Maas said, “In order for Nuclear Non-Proliferation Treaty to be properly implemented and strengthened, special attention must be paid to the issue of nuclear disarmament.

Russia and the United States can play an important role in this regard, especially by returning to the new START treaty.” MA/IRN84088962