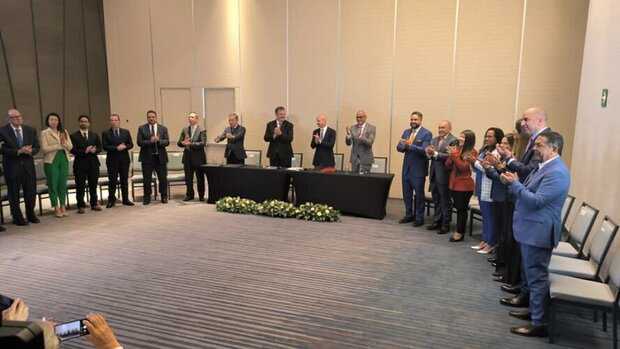 TEHRAN, November 27 (MNA) – Venezuela's government and the opposition have signed a preliminary agreement to find a way out of the country's political crisis.

The Venezuelan government and its opposition, the Venezuelan Unity Platform, on Saturday signed a second partial agreement focusing on measures for the welfare of the people, following the restart of the negotiation process in Mexico.

The stalled talks resumed after a round of negotiations on August 13, 2021, also held in Mexico City, the country's capital.

"It is a triumph of politics and merit to recognize the participants.

Mexico is your home, congratulations! Good news for the Venezuelan people," Ebrard wrote on his Twitter account, Anadolu Agency reported.

One of the achievements from this second round of negotiations was the release of frozen assets which will be used to address the socioeconomic turmoil in the country.

In a joint effort, the government and its opposition requested the UN to release billions of dollars held in different foreign countries through a "social protection" fund.

According to Jorge Rodríguez, a delegate representing the government of Nicolas Maduro, the resources will go to strengthen the country's health care system and secure medicines and vaccines.

He said the resources will be invested in the country's electric power service and school infrastructure and to attend to the needs derived from recent natural disasters that hit Venezuela.

Since the reopening of the dialogues between both parties in 2021, the Venezuelan government led by Maduro has insisted on lifting the economic sanctions imposed by the US and Europe.