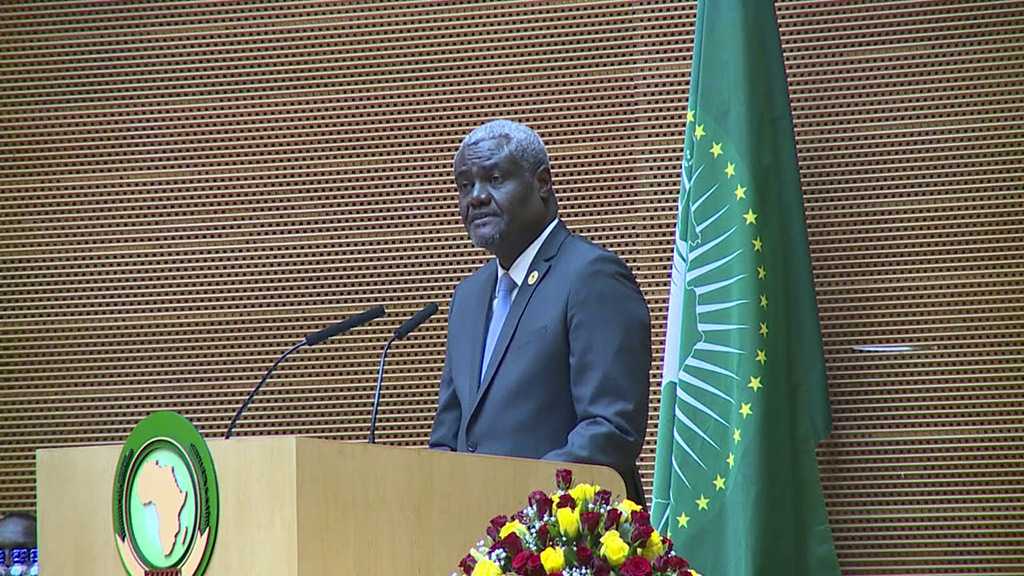 By Staff, Agencies The African Union [AU] has condemned as “illegitimate” US President Donald Trump's so-called “deal of the century” on “Israeli”-Palestinian conflict, stressing that the plan is in sheer violation of the United Nations and the African body’s resolutions. AU Commission Chairman Moussa Faki Mahamat said the remarks during the 33rd Ordinary Session of the Assembly of the Heads of State and the Government of the AU held in the African body’s headquarters in the Ethiopian capital Addis Ababa on Sunday.

The so-called plan represented the “umpteenth violation of multiple United Nations and African Union resolutions,” he said, expressing solidarity with “the Palestinian cause.” Mahamat noted that Trump’s plan was prepared without international coordination, stressing that it “trampled on the rights of the Palestinian people”, a line that drew applause in the main hall of the AU’s headquarters.

Trump unveiled his much-delayed and self-proclaimed “deal of the century” during an event at the White House alongside “Israeli” Prime Minister Netanyahu in Washington on January 28.

All Palestinian groups have unanimously rejected the American president’s highly-provocative initiative that largely meets the “Israeli” entity’s demands in the decades-old conflict while creating a Palestinian state with limited control over its own security and borders.

It enshrines al-Quds [Jerusalem] as “‘Israel’s’ undivided capital” and allows the regime to annex settlements in the occupied West Bank and the Jordan Valley.

The plan also denies the right of return of Palestinian refugees into their homeland, among other controversial terms.

Palestinian leaders had severed almost all ties with Washington in late 2017 after Trump controversially recognized al-Quds [Jerusalem] as the so-called “capital” of the “Israeli” regime.

Also at the summit on Sunday, Egyptian President Abdel Fattah al-Sisi, the outgoing AU chair, said that “the Palestinian cause will always be in the hearts and minds of the people of Africa.” Sisi’s successor in the African Union, South African President Cyril Ramaphosa, for his part, compared the American president's plan to regulations in place during his country's apartheid period.

“As I listened to it and as I read everything that's written about it, it brought to mind the horrible history that we in South Africa have gone through,” he said.

Palestinian Authority President Mahmoud Abbas regularly attends the AU summits but on Sunday he was represented by Palestinian Prime Minister Mohammad Shtayyeh, who reiterated that the position held by Palestinian leaders is that the so-called plan “has no legitimacy whatsoever.” Apart from the Palestinian leaders, who have boycotted Trump’s administration over its rigid pro-“Israel” stance, many other international organizations, including the European Union [EU] and the Organization of Islamic Cooperation [OIC], have already rejected the “deal of the century.” On Saturday, the Arab Inter-Parliamentary Union [AIU] also reiterated its absolute rejection of the plan.

Representatives of 20 Arab parliaments participated in an emergency AIU meeting titled “Supporting the Palestinians in their Just Cause” in the Jordanian capital Amman to discuss the implications of the controversial US plan.

In their final communiqué, the top Arab parliamentarians vehemently rejected any unfair or unilateral solution that does not fulfill the Palestinian people’s inalienable rights, chief among them is the right to establish an independent state, with al-Quds as its capital.