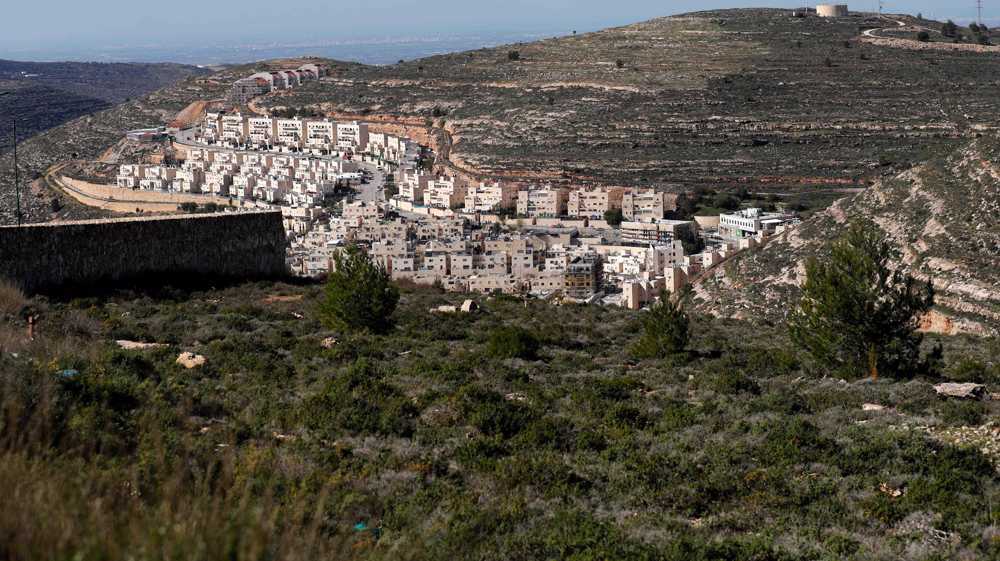 said
Thursday Israel has stepped up settlement expansion activities in defiance of UN Security Council Resolution 2334, which pronounces settlements in the West Bank and East Jerusalem al-Quds “a flagrant violation under international law.”  Israeli prime minister Benjamin Netanyahu's settlement policy and theft of Palestinian land with US support will not bring security and stability, the spokesman noted.

The remarks come after Israeli authorities on Wednesday invited contractor bids for the construction of more than 2,500 settler units in the occupied West Bank and East Jerusalem al-Quds.

Last week, Netanyahu ordered plans be advanced for the construction of 800 new settler units in the occupied West Bank.

Israeli PM orders plans to be advanced for construction of 800 new settler units before Biden sworn in
Israeli Prime Minister Netanyahu orders plans be approved to construct 800 new settler units in the occupied West Bank.
Peace Now, an Israeli anti-settlement group that monitors settlement expansion activities, recently accused Israeli authorities of a “mad scramble to promote as much settlement activity as possible until the last minutes before the change of the administration in Washington.” Joe Biden, who was sworn in on Wednesday, had earlier indicated that his administration would restore the US policy of opposing settlement expansion in the occupied Palestinian territories.

But ahead of the swearing in, Biden’s nominee for secretary of state Antony Blinken said the incoming administration will not reverse Trump’s controversial recognition of Jerusalem al-Quds as Israel’s "capital." Palestinian movements on Thursday reacted with outrage to Blinken's remarks, with Hamas saying they run counter to the international laws and resolutions that recognize Jerusalem al-Quds as an occupied city.

The administration of former President Donald Trump broke with decades of the United States’ bipartisan show by not opposing Israeli settlements.

The “deal of the century” that Trump brokered envisions Jerusalem al-Quds as “Israel’s undivided capital” and allows the Tel Aviv regime to annex settlements in the West Bank and the Jordan Valley.

Trump outlines contentious Palestine scheme, says Quds will be Israel’s ‘undivided capital’
Trump repeats his hugely-controversial endorsement of occupied Jerusalem al-Quds as Israel’s “capital” as he outlines his administration’s self-styled Mideast plan.
Ever since, Palestinians have stopped recognizing any intermediary role by Washington in their conflict with Israel.  The UN Security Council has condemned Israel’s settlement activities in several resolutions.

In December 2016, UNSC Resolution 2334 called on its member states to ensure that they do not participate in actions of de facto annexation of the occupied Palestinian lands.

Israel lays claim to the entire Jerusalem al-Quds, but the international community views the city’s eastern sector as occupied territory and Palestinians consider it the capital of their future state.

Palestinians, who seek an independent state in the occupied West Bank and Gaza, with East Jerusalem al-Quds as its capital, have condemned the US agenda against them