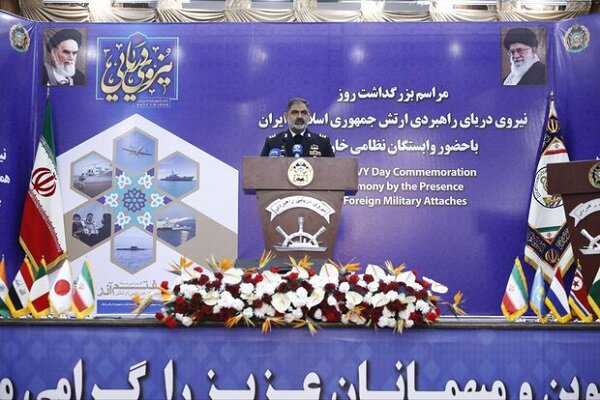 TEHRAN, November 30 (MNA) – The Commander of Iran Army Navy Rear Admiral Shahram Irani said that the development of maritime diplomacy is one of the main programs of Iran Army Navy Force which will be followed up op seriously this year.Speaking in a ceremony to commemorate the National Army Navy Day held on Wednesday with the participation of foreign military attaches in the Islamic Republic of Iran, Admiral Shram Irani said that Iran’s Army Navy has focused on the development of maritime diplomacy and cooperation with the naval forces of neighboring and friendly countries, adding that the country’s Navy will spare no effort in boosting its cooperation with those countries.

At the beginning of the ceremony, Iran’s Chief Navy Commander commemorated the name and memory of martyrs of eight years of Sacred Defense (Iraqi imposed war against Iran in 1980-1988) especially martyrs of the Army Navy Force and hilighted that martyrs self-sacrificed in safeguarding the sublime values of the Islamic Revolution in the international arenas.

Rear Admiral Irani pointed to the moves taken by enemies of the country in destroying homegrown destroyers during the eight years of Sacred Defense and said that enemy engaged in a direct war with the Islamic Republic of Iran during the final days of unjust war in which the Ba'thist enemy had been armed to teeth and attacked Iranian destroyers of Sahand and Sabalan.

After that, Iran’s expert engineers at Navy Force started overhauling the damaged vessels and destroyers, he continued.

Irani futher pointed to the activities of Navy Force on the international stage and reiterated that the Army Navy Force of the country has always concentrated on developing the maritime diplomacy and boosting its cooperation with the naval forces of neighboring and friendly countries as a top priority.