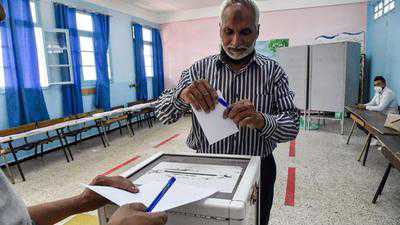 Algeria was voting Saturday in a parliamentary election overshadowed by a crackdown on a long-running protest movement that has campaigned for a mass boycott.

Pro-government parties have urged a big turnout for the 'crucial vote' which they hope will restore stability after two years of turmoil since the forced resignation of veteran president Abdelaziz Bouteflika.

The protest movement, which had held weekly demonstrations for reform until they were effectively banned last month, has denounced the election as a 'sham' that betrays the hopes of the hundreds of thousands of Algerians whose protests forced Bouteflika from power.

Seven leading protest movement figures were arrested ahead of polling day while police deployed heavily in the capital Algiers to preempt any attempt to protest.

Authorities are hoping for a solid turnout, but the two previous national votes since Bouteflika stepped down a presidential election and a constitutional referendum both saw record low figures after the protest movement urged a boycott.

Those who do vote in Africa's biggest nation must choose from a field of more than 13,000 candidates for the 407 seats in parliament, more than half listed as 'independent'.

The head of the Algerian League for the Defence of Human Rights, Said Salhi, has denounced the crackdown that preceded the vote.

The 'repressive atmosphere and the restrictions placed on human rights and freedoms mean these elections have no democratic value', Salhi said.

Farida Hamidi, a Paris activist of the protest movement, known as Hirak in Arabic, said the election meant little to young Algerians dreaming of change.

'We reject it all: the president, the parliament, the constitution, everything done by this military junta which has been ruling Algeria since 1962 we want something else,' she said.