Armenia, Iran not have any misunderstandings, spox. says 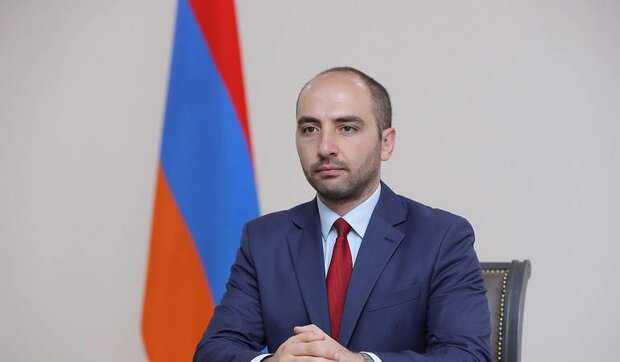 TEHRAN, November 02 (MNA) – Saying that Armenia doesn't have any misunderstandings with Iran, the Armenian Foreign Ministry Spokesperson says Yerevan and Tehran do not have different opinions on most issues.Armenian Foreign Ministry Spokesperson Vahan Hunanyan told in an interview with Mehr News Agency that Armenia and Iran enjoy very long historical relations and these relationships are not only limited to governments but also exist between the two nations.

Describing Iran as a key partner for Armenia, he expressed hope to see that these relations will become stronger in all fields.

"I think we don't have any misunderstandings with Iran," he said and added that Yerevan and Tehran do not have different opinions on most issues.

As a result, the two countries' relations will get stronger in the future, the Armenian diplomat noted.

Answering a question about his country's relation with Azerbaijan, he said, "Armenia seeks to establish peace in the South Caucasus region.