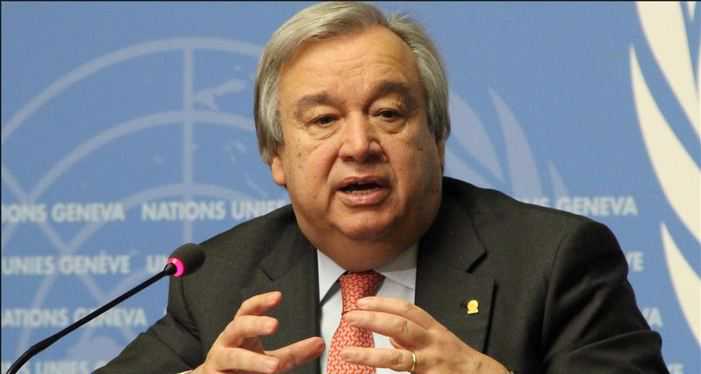 The Special Envoy of the UN Secretary-General for Yemen, Antonio Gueterres, briefed the open session of the security council, tackling the latest developments in the Arab country facing a five-year Saudi-led aggression.

What follows is the text of the briefing: Thank you very much Mr President, thank you Members of the Council, We are witnessing in Yemen what we have long feared.

Since October, I have briefed this Council several times on the signs of hope and momentum towards peace.

But at the same time, we have all been acutely aware that renewed violence could reverse the gains made, render peace more difficult and inflict even more severe humanitarian consequences on the population.

During the past month, since we last met, the military situation has grown increasingly dire.

Most of the heavy fighting has taken place in Nihm district of the governorate of Sana’a, and also Al-Jawf, Ma’rib and Sa’adah governorates.

Frontlines which had been quiet for several months have been drawn into the escalation and reports of airstrikes and cross-border aerial attacks have increased considerably.

And I am distressed as we all must be, by reports of the dozens and possibly hundreds of civilian casualties, displacement of families and damage to schools and hospitals.

Women and children continue to suffer most from several attacks.

And Yemeni journalists and civil society activists have also continued to face severe pressure and restrictions on their activities and their publications.

But the parties, Mr President, have reassured me many times of their belief in a peaceful, political solution to this conflict.

But peace cannot be taken for granted.

It requires continuous commitment and the nurturing of a political process to make it happen.

This escalation, that I have just described, directly contradicts the parties’ desire to move in that direction.

The leaderships of both parties have the ability and responsibility to rein in the violence, scale down the rhetoric and commit to a more sustainable de-escalation.

Prior to this recent increase in violence, the parties, as we observed in this Council, had considerably reduced the number of airstrikes and cross-border aerial attacks, and that de-escalation had a strong, positive impact on the prospect of peace, and indeed can do so again if the parties are committed.

I am concerned that the escalations, Mr President, may also threaten the progress made in Hudaydah, where the situation is vulnerable to an increase in violence.

In December 2018, the parties reached the Hudaydah Agreement in Stockholm based on the shared goals of avoiding military operations in the city and ensuring the passage of humanitarian and commercial goods through those three ports.

We must not lose sight of those goals.

The escalations on other fronts have raised tensions and led to greater volatility in Hudaydah, but have not yet had a major impact on the overall military situation, a small blessing but one we must cherish.

UNMHA, under the leadership of General Guha, is striving to maintain cooperation between the parties, despite continued operational challenges and restrictions on freedom of movement.

However, there has been an increase in violence in the city and southern districts of the governorate.

I fear that a major provocation could pose a challenge to his efforts to maintain calm in Hudaydah and distract the parties from the implementation of that agreement.

Mr President, Despite this dire and unremittingly dire military situation, the parties have made significant progress in their efforts to build confidence and provide relief for those in suffering, so between the 10th and the 16th of February, the parties met in Amman and agreed on the 16th to exchange prisoners and detainees in line with the executive mechanism agreed those 14 months ago in Stockholm.

This is a firm commitment from the parties to the families that they will be reunited with their loved ones.

And it is a sign that the parties are prepared to progress towards their commitment to release all those eventually, all for all, deprived of their liberty in relation to the conflict.

I commend, heartedly the Government of Yemen and Ansar Allah for their positive engagement and for making the concessions required to make progress, and I was present during those discussions and the atmosphere to make those concessions was clearly present.

I also thank the coalition of course but also the Hashemite Kingdom of Jordan for hosting the meeting.

We all look forward to the implementation of those releases agreed as soon as possible.

I should add that as usual, this process benefits from the unique value of the International Committee of the Red Cross in partnership with whom we are very proud to be.

This positive step, Mr President, follows the release from prison by Ansar Allah, supported by our colleagues in UNICEF of 68 boys encountered during military operations..

The boys are now in interim care and, I’m glad to say, being united with their families, and I encourage Ansar Allah to continue to engage with the UN and with UNCIEF to make progress in addressing child rights violations.

Further, during the first half of February, the first two medical air bridge flights transported 28 patients from Sana’a for medical assistance abroad.

And I commend again the commitment of the parties and the support of the Kingdom of Saudi Arabia for this humanitarian measure.

And I am also grateful both to the Hashemite Kingdom of Jordan and to the Egyptian government who will also host further patients.

Despite this sign of hope, small but significant, many thousands of patients needing medical care abroad remain in Sana’a, where such care is not available.

For their sake, the medical air bridge must operate regularly and not just as a temporary solution.

I know that my good friend and colleague Lise Grande, the UN Resident Humanitarian Coordinator for Yemen, and Altaf Musani, the WHO Representative in Yemen, are working very hard to make this happen, and I’m sure you will wish to join me in hoping that those efforts bear fruit.

Overall, Mr President, the progress on these issues, these humanitarian measures, show us that indeed, even in this bleak season, the parties can work together, can sit across the table from each other, to relieve the suffering of the people of Yemen and that the confidence that they have built -we must hope- has not completely gone to waste.

However, as these remarks suggest, my fear is that this confidence, this trust, these relationships are becoming increasingly fragile.

Mr President, I am also acutely alarmed by the lack of progress in addressing the threat posed by the SAFER oil tanker, we have discussed it before in this Chamber.

The condition of that tanker deteriorates by the day.

Any rupture could spill over a million barrels of oil into the Red Sea, causing an environmental and economic catastrophe for Yemen and its neighbours, and we are all on notice of that prospective catastrophe.

This threat, which we discuss every time we visit Sana’a, must be dealt with on a purely technical basis, without politicization.

United Nations is committed, ready, prepared to send objective, technical experts to undertake an assessment and initial repair, to be immediately followed by permanent arrangements to address the threat and make that vessel safe.

In my briefing last August, I informed this Council that a date had been agreed for the assessment to occur later that month.

But it never happened.

The assessment mission must take place immediately, unconditionally, with no further delay.

Mr President, Everything I have heard, in the almost two years that I had the privilege of serving the Secretary-General and yourselves and this assignment, everything I have heard from Yemeni leaders points to a core principle that I wish to emphasize today: peace in Yemen can only emerge from a political compromise between both parties through a process mediated by the United Nations, our process that we discuss each time we meet.

And engagement in that UN process must be unconditional.

It cannot be secondary to territorial gains, particularly when as we have so vividly seen in Yemen, there is no military solution to this conflict.

So how do we move from here to the launch, at last, of that process? And with the encouragement of this Council, we are actively working towards that goal and the re-establishment of truly inclusive de-escalation arrangements, but we realize that a reduction in violence is not enough and this has been the lesson of the past two months.

We need the parties to unite around a vision for a post-conflict Yemen in line with the relevant resolutions of this Council.

It is perhaps timely, Mr President, to recall those elements: namely a genuinely inclusive government and a political transition process; a military and security arrangement and sector that safeguards all Yemenis; the chance for reconstruction and the revitalization of the country’s institutions and economy; and an acceptance finally that enmities must end while differences remain.

These are reasonable, achievable goals and they’re no secrets And I insist, Mr President, that it’s time for us also to recall them and to hope that soon we will see their realization when the political will is truly there.

Mr President, finally, I am sometimes accused of impatience and now we see why.

Hesitance on the political track allows the war drums to beat louder, allows provocations to spiral, and to multiply.

The hard work that the parties have done is at grave risk of being undone.

The parties must display the courage that I know they have to set aside short-term military goals and make a sustained, tangible and irreversible commitment to the political process.

Thank you very much, Mr President