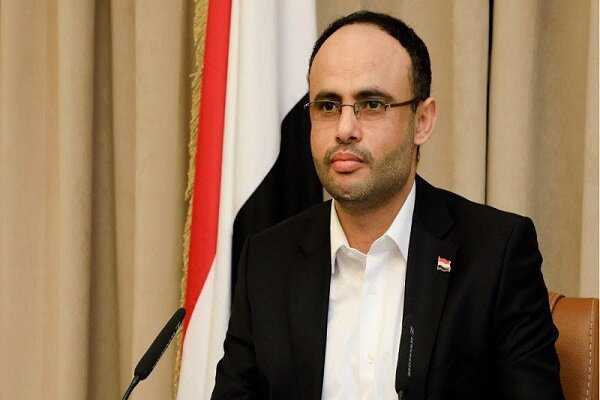 TEHRAN, November 30 (MNA) – Advising the US-Saudi coalition to resort to peace, the Chairman of the Yemeni Supreme Political Council said that Yemeni people will not stand idly while their wealth plundered.

Mahdi Al-Mashat pointed out that the US-Saudi occupiers believe that defending the Yemeni People's wealth against looting is wrong because it goes against its interests.

He stressed that American insolence increases the Yemeni people's insistence on continuing the path of liberation and independence.

"We reaffirm our firm position to protect the people's capabilities and prevent the plundering of their Oil and Gas.

The decision to protect wealth does not mean any threat to international navigation, as US-Saudi aggression claims," he said.

He renewed the Yemeni people's condemnation of the aggressive efforts to plunder Yemen's wealth and deprive its people of their natural entitlements, condemning efforts of US-Saudi aggression to obstruct payment of salaries, and disrupt peace efforts, Almasirah reports.

"Yemeni people will not stand idly while their wealth plundered and they are suffering the most severe siege, so we advise US-Saudi aggression to resort to peace," stressing "the need to expedite payment of salaries of Yemeni people." Saudi Arabia launched the devastating war on Yemen in March 2015 in collaboration with its Arab allies and with arms and logistical support from the United States and other Western states.

The objective was to reinstall the Riyadh-friendly regime of former president Abd Rabbuh Mansur Hadi and crush Yemen’s Ansarullah popular resistance movement, which has been running state affairs in the absence of a functional government in Yemen.

While the Saudi-led coalition has failed to meet any of its objectives, the war has killed hundreds of thousands of Yemenis and spawned the world’s worst humanitarian crisis.

The United Nations brokered the truce between the coalition and Ansarullah.

As part of the ceasefire, commercial flights have resumed from Sana'a International Airport to Amman and Cairo, while oil tankers have been able to dock at the port city of al-Hudaydah.

Under the truce, commercial flights have resumed from the Yemeni capital of Sana’a to Jordan and Egypt, while oil tankers have been able to dock in the lifeline port city of al-Hudaydah.