Syria constitution must be drafted without interference 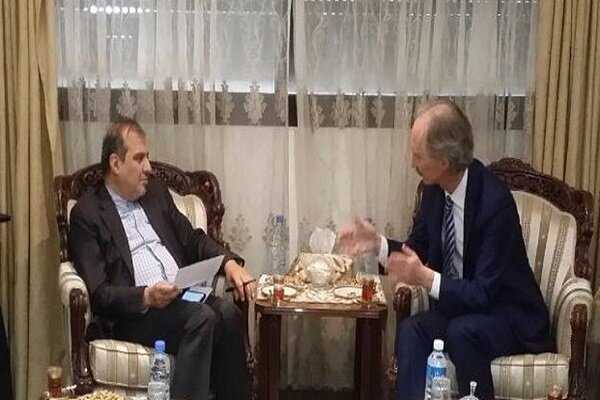 TEHRAN, October 20 (MNA) – In a meeting with the UN Special Envoy for Syria Geir Pedersen, Iranian foreign minister’s senior advisor on special political affairs Ali Asghar Khaji emphasized drafting the Syrian constitution without foreign interference.During the meeting, the two sides discussed the ongoing sixth round of talks in Geneva between the Syrian Government and the opposition to draft the Syrian constitution. UN envoy Pedersen gave a positive assessment of this round of talks, expressing hope that this round would see progress. Khaji, for his part, welcomed the positive outcome of the sixth meeting of the Syrian Constitutional Committee, announcing Iran’s support of efforts made by the UN Special Envoy for Syria. He also said that drafting the Syrian constitution must be done without foreign interference and through national dialogue and that Iran supported the process in the framework of the Astana Format. The Iranian official stressed the necessity of lifting sanctions against Syria and urged the UN to facilitate humanitarian aids and funding reconstruction in Syria. ZZ/FNA14000728000102