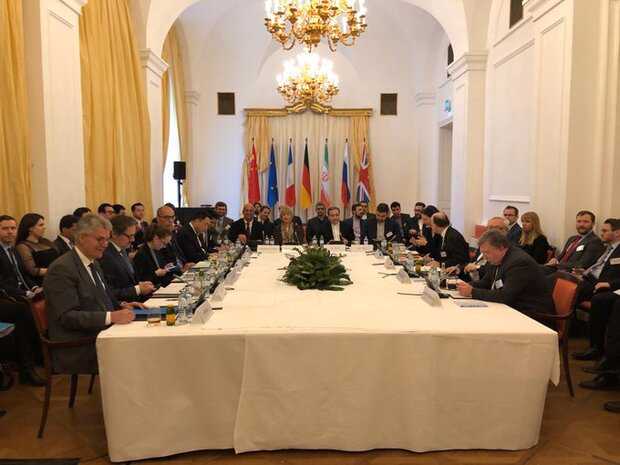 TEHRAN, February 26 (MNA) – In a statement released on Wednesday, the chairs of the 15th meeting of the Joint Commission of JCPOA stressed the importance of preserving the agreement, recalling that it is a key element of the global nuclear non-proliferation architecture.The joint commission meeting was held at the level of deputy foreign ministers and director generals of P4+1, with the representatives of EU, Germany, France, Russia, China, the UK, and Iran in attendance.

Under the terms of the JCPOA, the Joint Commission is responsible for overseeing the implementation of the agreement.

The Joint Commission was chaired, on behalf of EU High Representative Josep Borrell Fontelles, by EEAS Secretary General Helga-Maria Schmid and was attended by representatives of China, France, Germany, Russia, the United Kingdom, and Iran at the level of Ambassadors/ Political Directors/Deputy Foreign Ministers.

The meeting addressed both Iran's steps in reducing its nuclear commitments under the JCPOA including its announcement of 5 January 2020, as well as longstanding concerns, recognized by all participants, regarding the impact of the US withdrawal from the agreement in 2018 and the reimposition of sanctions by it.

In this context, serious concerns were expressed regarding the implementation of Iran's nuclear commitments under the agreement.

Participants also acknowledged that the reimposition of US sanctions did not allow Iran to reap the full benefits arising from sanctions-lifting.

All participants reaffirmed the importance of preserving the agreement recalling that it is a key element of the global nuclear non-proliferation architecture.

As a follow up to the statement of the High Representative of 24 January 2020 participants reviewed expert-level discussions which have taken place in different formats in past weeks, both as regards nuclear implementation issues and the wider impacts of the withdrawal of the US from the JCPOA and its re-imposition of sanctions and benefits arising from sanctions-lifting.

Experts were tasked to take these discussions forward.

Participants welcomed positive developments in the processing of first transactions by INSTEX and the addition of four European countries as new shareholders, with more to follow, while acknowledging the importance of further strengthening the instrument.

Participants reiterated their strong support and collective responsibility for the continuation of key nuclear non-proliferation projects that are an essential part of the JCPOA They welcomed continued efforts by the Arak Working Group Co-Chairs, China, and the United Kingdom, in taking the Arak Modernisation Project forward.

They took note of recent developments concerning the Fordow facility and expressed strong support for the work of Russia in continuing the implementation of the stable isotope project.

The meeting took place against the background of the COVID-19 outbreak.

Participants expressed their solidarity with China, Iran, and all countries affected, in their efforts to address the outbreak and, in particular, the contribution of China and those later affected to the global fight against this public health challenge.