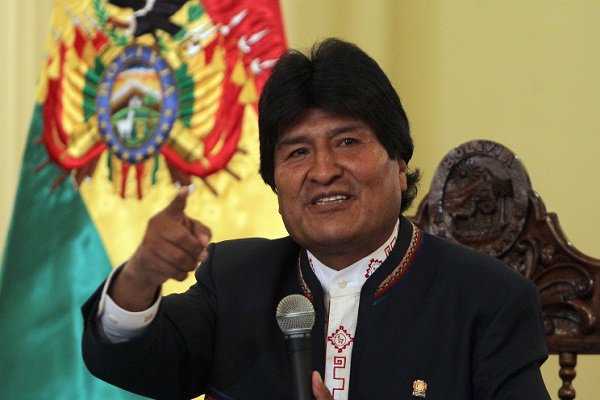 TEHRAN, November 11 (MNA) – The leftist Latin American governments have deplored an opposition-led coup d’état against the government of Bolivia’s Evo Morales, who was forced to resign under pressure from the army amid violent post-election protests.Morales, the candidate of the Movement Towards Socialism (MAS) party, got 47.08 percent of the ballots in October elections and took office as Bolivia’s new president.

However, the top opposition rejected the outcome, saying there had been fraud in the election process and sparking violent street protests that left three people dead and hundreds more wounded, in what the Morales government called a coup bid.

Following an audit, the Organization of American States, which monitored the election process, said in a report on Sunday that it had found evidence of irregularities on a wide scale in the vote.

Reacting positively to the report, Morales initially called for “new national elections, which, by voting, allow the Bolivian people to democratically elect new authorities.” Later in the day, however, the 60-year-old said he was stepping down in a shocking announcement, which followed a call by senior army and police authorities for the Bolivian leader to quit.

Venezuela’s President Nicolas Maduro called for a mobilization of political and social movements “to demand the preservation of the life of the Bolivian native peoples, victims of racism.” As Morales resigned, a group of hooded protesters in the capital, Sucre, overran the embassy of Venezuela, a strong ally of the Morales administration.

“Hooded persons with dynamite and shields have taken over the Venezuelan embassy in Bolivia.

We are OK and safe, but they want to commit a massacre against us,” Ambassador Crisbeylee Gonzalez told the state news agency ABI “Help us report this barbarity,” ABI quoted her as saying.

Meanwhile, Cuba’s Foreign Minister Bruno Rodriguez described Morales as “a protagonist and a symbol of the rights of the indigenous peoples of our Americas.” Furthermore, Brazilian politician and ex-president, Lula da Silva, insisted “my friend Morales” had been removed in a coup, evidence of “an economic elite in Latin America that did not know how to share democracy with poor people.” Argentina’s President Cristina Fernandez de Kirchner said a coup had been carried out “by the joint actions of violent civilians, police personnel who confined themselves to their barracks, and the passivity of the army.” Meanwhile, Mexican Foreign Minister Marcelo Ebrard said on Sunday that the country would offer asylum to outgoing Bolivian President Evo Morales if he sought it.

In turn, the Nicaraguan government on Sunday issued a statement “strongly condemning” the “coup” against Morales “We express our rejection and repudiation of fascist practices that ignore the constitution, laws and institutionalism that govern the democratic life of nations, the statement said.

“The Secretary-General also appeals to all actors to commit to achieving a peaceful resolution of the current crisis and to ensuring transparent and credible elections,” said a statement issued by Guterres’ spokesman.