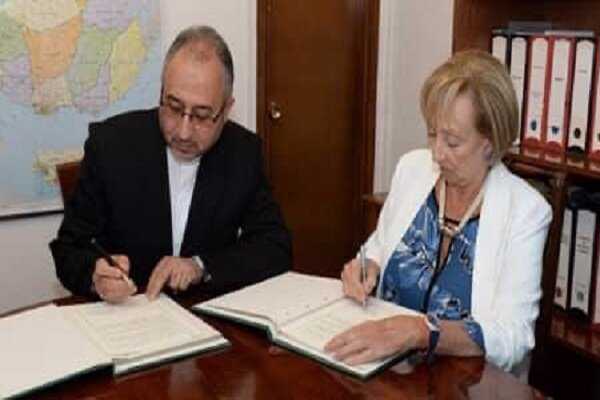 TEHRAN, November 08 (MNA) – A Memorandum of Understanding (MoU) was inked between Iranian Ministry of Science, Research and Technology and Uruguay’s Ministry of Education and Culture on Friday.The MoU was signed by Uruguay's Minister of Education and Culture Maria Julio Munioz and Iranian Ambassador to Uruguay Abolfazl Pasandideh on behalf of Iranian minister of Science, Research and Technology.

Exchanging professors and researchers, conducting research projects jointly in the field of science, organizing joint specialized scientific commissions, holding courses on teaching Persian and Spanish languages in academic and scientific centers of the two countries were some of the areas for cooperation noted in the MoU Upon signing the MoU, Uruguay's Minister of Education and Culture Maria Julio Munioz pointed to the high capabilities and capacities of Iran in scientific and technological fields, voicing her country’s readiness to make use of Iran’s scientific capacities.

For his part, Iranian Ambassador to Uruguay Abolfazl Pasandideh pointed to the 117-year long history of bilateral ties between Iran and Uruguay and termed Uruguay as an old and trusted country for the Islamic Republic of Iran.

Organizing traditional Iranian music concerts in artistic and cultural centers and various universities of Uruguay, organizing Nowruz Exhibition, symbol of peace and friendship and introducing Iran tourist attractions were of the most important cultural activities of Iran in Uruguay taken in the past two years, the ambassador added.